Hydrogen is the word on everybody’s lips. This is because hydrogen, notably green hydrogen, holds the key to decarbonising the fuels we use today.

The cost of green hydrogen is a function of the volume of power needed, the cost of power supplied, the cost of the electrolyser and its system, and the opex to run the system. Given this simple formula, a pricing methodology for electrolyser companies should provide developers and utilities with a clear sense of how much it costs to produce a kg or a m³/h of hydrogen from each individual supplier. But the most popular approaches today do not provide that.

The most common proxy method for determining which electrolyser company has the most cost competitive solution is to focus on the upfront investment cost of electrolysers, often expressed as €/kW of capacity. This is deeply problematic. Not only does it ignore system efficiency – which is crucial given that power accounts for the majority of the cost per unit of green hydrogen produced – it says little about lifetime, purity or service/maintenance costs. Nor is it clear whether a nominal cost per m³/h approach entirely overcomes these limitations, as it doesn’t address lifetime considerations either. It is because of this challenge that an alternative must be proposed.

Today, all green hydrogen cost methodologies start with a significant amount of built-in assumptions which we believe detract from the first principles approach.

For example, the most common method for assessing the cost of green hydrogen is to assume that green hydrogen production will be financed through a project finance approach. This immediately assumes that the cost of hydrogen is a function of a 20-year project period, a minimum scale (2 MW being the smallest typically used) and a blended cost of capital from external debt and internal corporate equity. Further, a fixed electricity price supply (sometimes stated overtly as a power-purchase agreement) and a fixed off-taker are assumed. However, this is not the only structure used to finance green hydrogen assets and solely focusing on this approach neglects other considerations that customers may prioritise when acquiring electrolysers. For example, payback period concerns, where customers may prefer a quicker payback on capex, even if longer term costs are higher, or clients who operate on a merchant basis and who may value longevity of an asset over a lower upfront cost.

By taking a first principles approach, we have removed these latent assumptions in the cost assessment of green hydrogen. Instead we focus on the most important variables that drive the total cost of green hydrogen:

While in a typical lifetime analysis, the time value of money needs to be accounted for, it has been excluded in this article to simplify the process. This partly reflects the desire, mentioned earlier, to avoid falling into latent assumptions around use cases, which can distort our understanding of costs. However, we are developing a forthcoming study to look at hydrogen prices on a project level for different use cases, which will address the time value of money.

We will now take each of these components in turn and expand on how they are calculated and ultimately feed into a new pricing approach for green hydrogen.

Let’s look at the cost of electrolysers to determine the capex. Manufacturers make different electrolysers: different sizes, hydrogen production rates, efficiencies and lifetimes. This makes it tricky to compare them simply by the unit cost. So, to make the capex comparable, the industry usually expresses prices in two ways: cost per kW of electrical capacity or cost for a nominal production rate in m³/h. As already stated, we believe that these traditional methods of looking at capex are flawed.

To know if you are buying an efficient machine that can produce hydrogen cheaply, it is vital to look at the capex in relation to the following: production rate of hydrogen over the lifetime of the device and the electricity needed to produce a given unit of hydrogen. The lifetime of the electrolyser is a powerful lever in determining the cost of hydrogen and cost analysis can be inaccurate if it does not factor in the true/effective lifetime of devices. If two electrolysers have the same capex but different lifetimes, they will have significantly different lifetime costs of hydrogen produced. However, this is missed in the current pricing formula. Further, as analysts often view green hydrogen through a project finance lens and assume fixed project periods (i.e. 20 or 25 years), there can be a tendency to assume the electrolyser will also survive for the fixed period without factoring in declines in efficiency and the subsequent need for replacing stacks and other elements. As these costs are often incorrectly accounted for over fixed project lifetimes, we suggest expressing the cost of hydrogen over a lifetime calculated through operational hours rather than a fixed lifetime.

We have already determined that when comparing the cost of electrolysers, capex is not enough on its own. We argue that efficiency can in fact be more significant, as it determines the opex needed to arrive at the total cost of green hydrogen. We reiterate for these purposes that opex consists mainly of electricity, water and maintenance costs.

Typically, power is the biggest expense for a green hydrogen project over its lifetime. Consequently, the cost of green hydrogen is greatly determined by the efficiency of the electrolyser. Simply put, an efficient electrolyser uses less power to produce one kilogram of hydrogen. Thus, an efficiency advantage of +10-15% over the lifetime of a system can have massive implications on the total cost of hydrogen produced. This will continue to become more important as manufacturers scale up and the capex drops, so it must be considered when comparing electrolysers.

For most electrolysers, water is an important factor for operation costs. Prices of water vary, particularly for electrolysers that require completely deionized water. These costs can be substantial for modular and remote systems, while for large industrial systems, economies of scale can minimise it.

Maintenance costs are part of the operation costs needed to keep the electrolyser running in good condition. Maintenance costs are significant and differ across AEM, PEM and Alkaline technologies. However, the key component to consider here are the terms of Service-Level Agreement (SLA) or extended warranties. These include costs that some have described as being practically deferred capex costs for replacements of stacks or other parts. Therefore, these opex items can quickly amount to annual payments well beyond the often assumed 1-3% to become a significant percentage of total capex cost.

Lastly, for use cases where electrolysers need to run at high utilisation, the reliability of the units and the downtime required for maintenance of the full system, may become another important cost component. This in turn may drive a preference for more modular configurations over single systems.

Taking capex + opex + lifetime + efficiency all together, we arrive at a more thorough approach to assess electrolyser prices. As we are looking for the cost of hydrogen that can be produced over the lifetime of the device, we denominate it in €/kg and call this EL CAPEX. This way, the price of the electrolyser is linked directly to the final product – green hydrogen – and the amount of hydrogen that it can be expected to produce over its anticipated commercial lifetime. To provide a real-world example, the table below shows today’s prices for the Enapter EL 2.1 and the projected prices for the mass-produced EL Model T in 2023/24:

In line with EL CAPEX, we also suggest denominating the operation and maintenance costs as price per kilogram. EL OPEX includes water and electricity costs needed over the lifetime of the electrolyser to produce the required hydrogen, as well as the maintenance costs in €/kg. Again, we are using the Enapter numbers for the EL 2.1 and EL Model T: 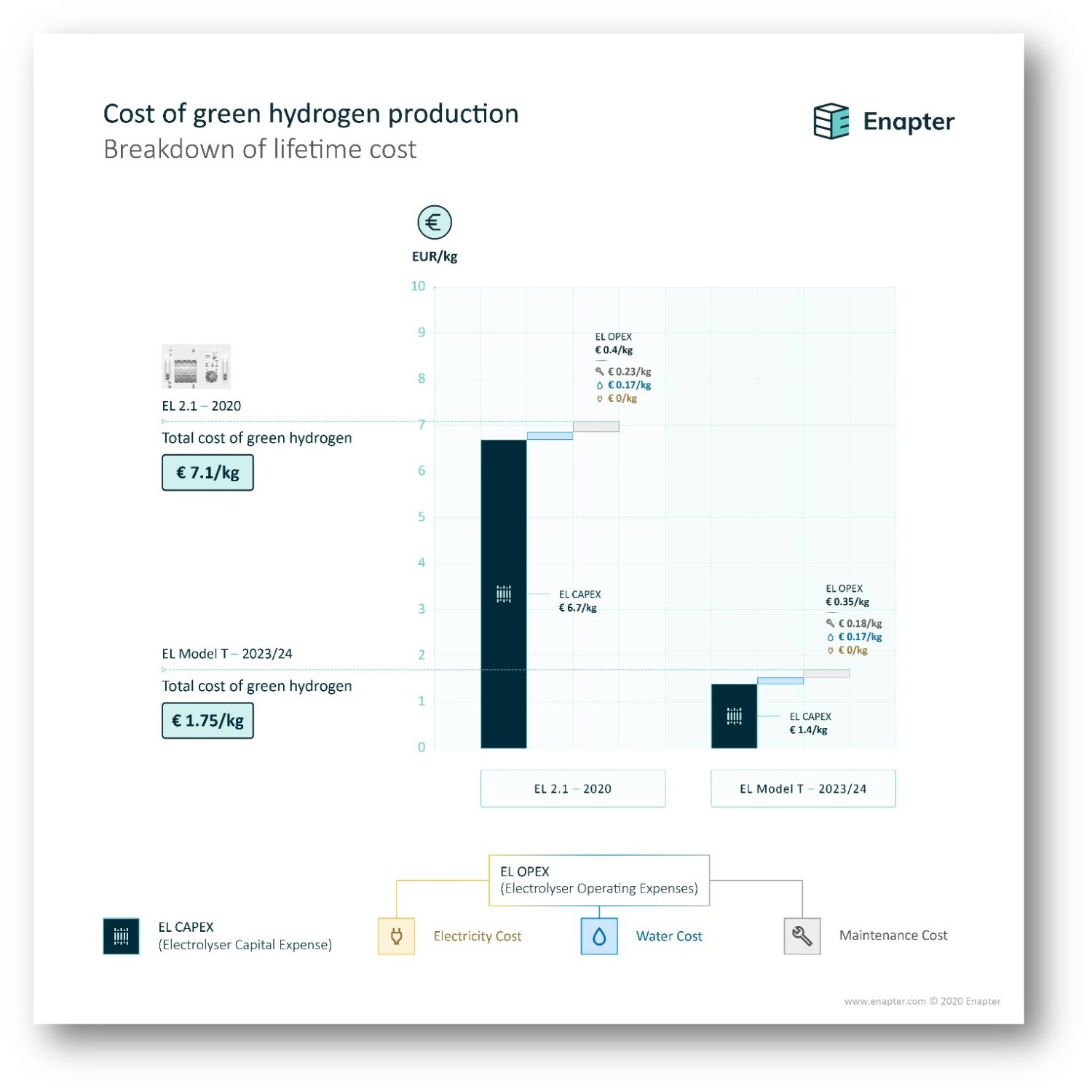 With electrolyser capex destined to drop significantly, the total cost of hydrogen will be largely determined by the cost of green electricity. As mentioned above, this is making the case for accounting for electrolyser efficiencies which we argue for with our EL OPEX formula. As the energy world is changing and our power supply from renewables will rise, electrolysers and other storage technologies will help regulate and absorb the demand from temporary overcapacities, providing grid flexibility. We are already witnessing the curtailment of electricity production from renewables on a large scale and energy prices have been at all-time lows or even negative. If power prices continue to fall as projected, capex comes back into the focus and a full lifecycle cost assessment as suggested in the EL CAPEX formula will be what investors should be looking for:

This piece invites for discussion and systematic elaboration to ultimately arrive at a more unified way of comparing green hydrogen and electrolyser prices. We are developing a forthcoming study to look at hydrogen prices on a project level for different use cases, which will more thoroughly address the matter.

For a full comparison, pressure and purity of the hydrogen produced also need to be considered. Enapter’s electrolysers produce hydrogen gas at 35 bar with a purity of ~99.9%. We used this assumption here.

You can find the original article from H2View here.