CrowdDesk – Hydrogen is a Game Changer in the Energy Market

Producing CO2-neutral hydrogen and storing renewable energies with innovative technology: Enapter aims to revolutionize the energy market with its AEM electrolysis (Anion Exchange Membrane). How it came about, what his private house in Thailand has to do with it and why he would advise his father to invest in his start-up in a crowd – we spoke to CEO Sebastian-Justus Schmidt.

Mr. Schmidt, why is energy storage crucial when implementing the energy transition and the use of renewable energies?

Energy demand is increasing, as is the share of renewable energies – but the problem is the storage of solar and wind energy. Renewable energy prices have dropped in recent years, making them the cheapest energy suppliers today. Produced excess electricity must be stored in order to ensure a constant and reliable power supply, as renewable energies do not always guarantee this. That is why storage technologies are becoming the decisive factor for a successful energy transition – worldwide.

Enapter has developed a modular and economical way of decentralized use of green hydrogen, which can also be stored. How did you get this idea?

I was looking for a reliable energy storage solution for my private home in Northern Thailand in 2014. So I came across the solution to produce hydrogen from solar energy, which also bridges the sun-free phases in the rainy season. At the beginning of 2015, the house was the first self-sufficient and CO2-neutral apartment building. When the company in Italy that I bought my electrolysers in 2014 was sold at the end of 2017, my hour came. 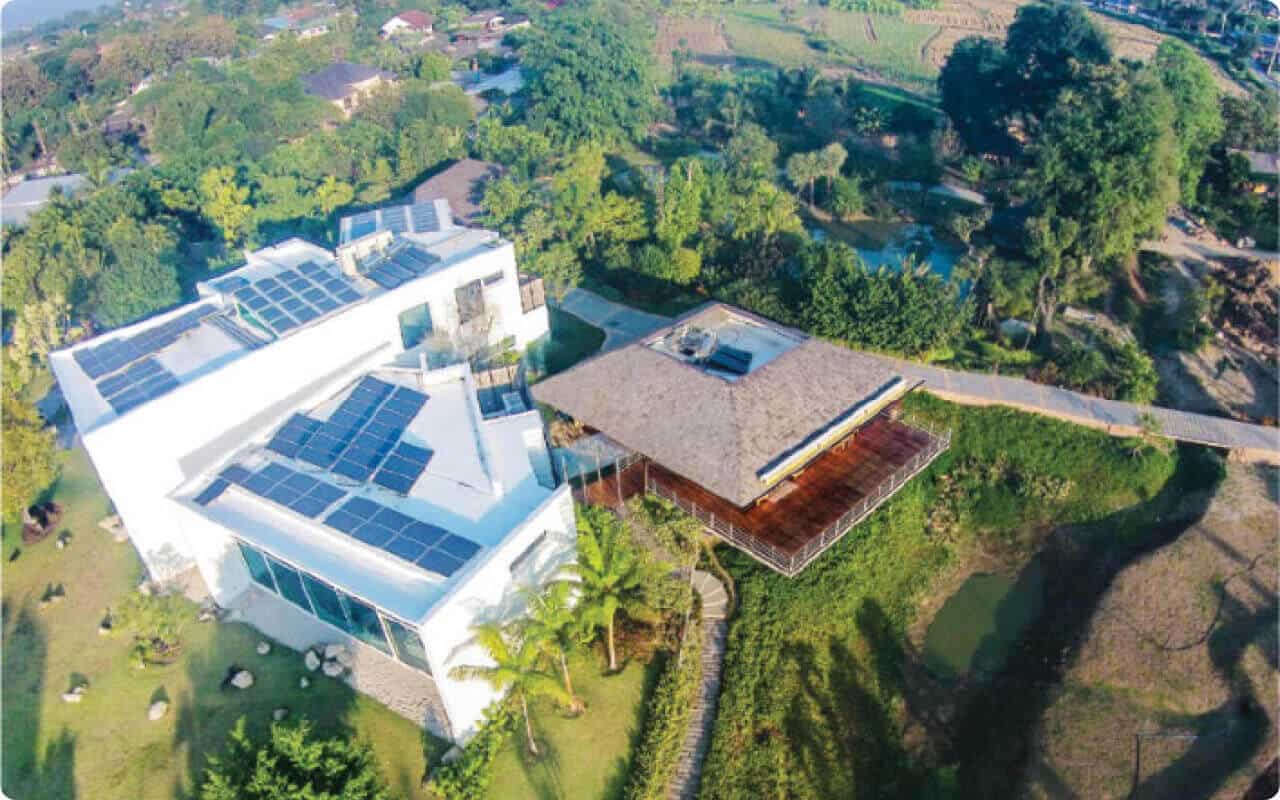 You then bought the Italian company. How so?

The main reason was their technology and the patents for the electrolysers. At that time, I had my own experience of operating four devices continuously over several years and was convinced. The idea for Enapter came a few weeks before the company was bought. The basic idea was to develop a new revolutionary control software for energy systems. That could then be integrated perfectly.

One of the biggest challenges for the mass market was the cost issue. How do you manage to reduce electrolysis costs?

AEM technology works without the use of precious metals and does not require high-purity water, as is otherwise the case with electrolysers. Thanks to an optimized and industrialized production line, the economies of scale of mass production result in enormous savings in production costs while maintaining high quality.

What is Enapter’s goal ?

The fossil energies are to be phased into the museum. That only works with clear concepts and competitively priced products. Unfortunately investments are still decided on costs; the decisive factor is the production costs for hydrogen – and you have to bring them to the very bottom. We can do that if we can produce hydrogen with our electrolysers for 1.50 euros per kilogram. Then we are at the price level of crude oil and a real alternative.

And it is also CO2 neutral.

Exactly. We are convinced that this will be a game changer in the energy market. Because we can obtain the energy source hydrogen directly on site and do not have to deal with the import and transport, which is costly and, above all, CO2-emitting. That’s where we start.

Where has the Anion Exchange membrane been used for hydrogen production so far?

We have customers from a wide variety of industries around the world. Industrial customers who use our electrolysers to cool power plants in China. Others use it to carry out nitrogen purification in Portugal or glass production in India. Our system is also used in food production. We have delivered several systems for small hydrogen filling stations, one station has been in use in Japan for a long time.

The range of possible uses is huge. Where should the electrolysers based on the anion exchange membrane be used in the future?

Due to competitive prices and the high level of integration, we see enormous scaling potential over the next few years. Inquiries are currently coming increasingly from the Power-2-X area to use hydrogen directly in boilers. We also see areas of application in micro-grids that can become self-sufficient with hydrogen.

In order to utilize this scaling potential and to prepare the process for mass application, Enapter needs capital. So far, eight million euros have been invested by investors and from equity . Why a crowd investing now?

The people around us feel a real spirit of optimism. This gives us many inquiries: How can you be helped? I meet many people who like the concept, who “just get started” and who also believe in the success of our cause. For some interested parties, the focus is more on supporting a good cause instead of generating a monetary advantage from it. Enapter offers both. My father also complained that he also wanted to invest his money wisely and not carry it to the bank. I can’t ignore that.

But investing in a start-up is always associated with high risks. What do you say to your father and investors who raise these concerns?

That there are and will always be risks. I believe that risks have increased in all areas of life. Growing protectionism, complicated peacekeeping and global warming. The market could also develop differently than expected. Construction delays could occur, customer payments could fail. These are entrepreneurial risks that an investor bears with his investment. An investor must be as aware of the risks as of the opportunities.

Where do you see these opportunities?

Enapter builds patented, secure systems that enable energy security at the local, decentralized level. Systems that are not technically dependent on finite raw materials. And each adapter system reduces the carbon footprint and the use of fossil fuels. These are potentials that cannot be discussed away.

Why should private investors invest in Enapter ?

We want to make hydrogen for everyone. The mass production of our technology means that we can offer our electrolysers so cheaply over the next five years that the hydrogen they produce can take on fossil fuels. In the past two years, Enapter has won major awards in the energy segment: from DENA and the World Energy Council to Shell’s New Energy Challenge and the Handelsblatt Energy Award. For the entire Enapter team, these awards are a sign that we are on the right track. Anyone who, like us, believes in the future of hydrogen should consider Enapter as an investment opportunity. Our concept of scaling is clear.

Why is equity crowdfunding just for a start-up so interesting?

I think that crowd investing is also a kind of pulse measurement: it helps us to draw attention. As a start-up, you can see how you are seen in a wide range of mostly financially experienced people. It is good for every young company. That is why we are extremely excited about the results.

What does Enapter intend to do with the capital?

We are preparing the step to mass production. We want to build a campus in Germany where hundreds of new jobs will be created. The collected capital is part of an overall financing strategy consisting of equity and debt measures. This will finance ongoing costs and investments.

“CrowdDesk’s white label solution is cheaper than the platforms – and investors benefit from every saving.”

Many start-ups turn to platforms through which they collect capital. Why does Enapter use a white label solution with its own funding page?

We have increased our visibility through many press articles in different media and the inquiries have increased. The awards won also helped. Enapter is now known. Our CFO then made me aware of CrowdDesk. Incidentally, the white label solution is cheaper than the platforms – and investors benefit from every saving.

What is the future of Enapter ? Where does the company want to be in two years?

We have a concrete plan for the next developments. After a year of development, the second generation of our electrolysers, a hydrogen generator with the model name EL 2.1, is now coming onto the market. The system is eight percent more efficient and at the same time 20 percent smaller. It is also much cheaper. The way for the electrolyzer, which is then to be mass-produced, is thus mapped.